THE ILLUSIONISTS is a feature-length documentary about the marketing of unattainable beauty around the world. To find out more about the film, click here. 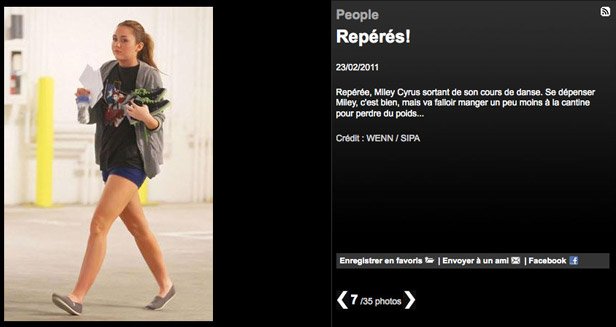 Earlier today, a friend posted on Facebook a status update that denounced as shameful an article by the popular French newspaper 20 Minutes. In the column “Repérés!” (“Spotted”), 20 Minutes published a candid photo of 18 year old American actress and singer Miley Cyrus, taken as she was leaving the gym. The caption read:

Spotted, Miley Cyrus leaving her dance class. Miley, working out is good, but you should eat a little less in order to lose weight…

For my friend, it seemed preposterous, irresponsible and downright dangerous to call Miley Cyrus “overweight.”

I should say, I was outraged but not surprised by the put down. France has very strict standards when it comes to women and their weight. A size 6 or 8 can be put down as “plump.” According to this 2009 article by the British newspaper The Guardian,

While a new study has confirmed that French women are indeed the slimmest in western Europe, their slenderness, it has found, comes at a cost: they also worry the most about their weight.

The report also found French women set themselves very tough standards, had a tendency to exaggerate their weight and considered themselves fatter than they were. France had the highest proportion of women who were underweight, but only half of underweight French women thought they were too thin.

I find body shaming to be pervasive here in France. A personal anecdote:

Three years ago, I was working as cinematographer at “Salon du Cinema” – a Paris trade show about film. During my lunch break, I went to the only food stand on the premises and realized to my horror that they didn’t have a single vegetarian item on the menu (I have been vegetarian for 15 years). So I purchased a muffin. I was taking my first bite, when a stocky, 50-something balding French man approached me and said “Watch out! You’re going to get fat.” My jaw dropped. I don’t remember what I responded – I most likely called him a pig and quickly walked away. But the experience left me with a bitter taste in my mouth. A complete stranger told me – a size 2 – that I shouldn’t eat a muffin because I would get fat. I wasn’t at all hurt on a personal level but rather worried about other women and girls who might have been the recipients of a similar comment.

I actually have friends and acquaintances here in Paris – women size 4, 6, 8 – who would go on strict diets, aided by their doctor (!!!), in order to lose weight. My protestations of the order of “you don’t need to diet, you are beautiful and healthy just as you are” would fall on deaf ears. My other spiel on “there are a plethora of industries that benefit from women thinking they need to lose weight… despite the fact that 98% of diets fail” also proves to be ineffective. I find this heartbreaking. At the same time, it gives me extra motivation to make “The Illusionists.”

What are your thoughts? Have you had similar experiences?

Out of the Box: Women, Beauty and Aging

Out of the Box: Women, Beauty and Aging