The Iconography of French Ads

THE ILLUSIONISTS is a feature-length documentary about the marketing of unattainable beauty around the world. To find out more about the film, click here.

I have been hesitating on whether or not to publish this post, for a plethora of reasons. The top one? My usually reserved personality and thus a reluctance to talk about personal experiences – especially when it comes to a hairy subject like this one. But I think this is an important conversation. So here we go.

For the past two weeks I have been collecting photos of billboard ads that I spotted around Paris. I wanted to write a post about gender roles in advertising. Then something happened this week, that made me think of the link in between the representation of female bodies in ads and the way that real women are treated in the street. 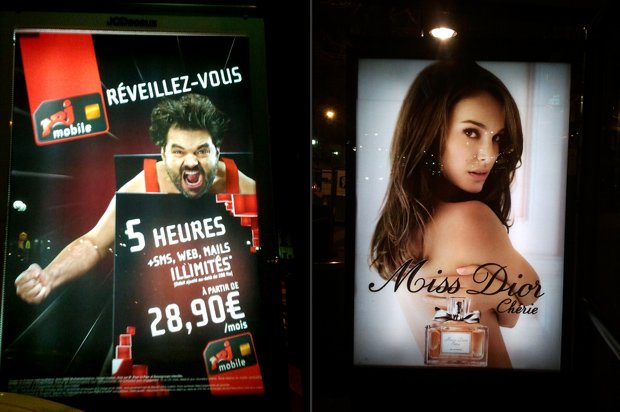 Every season, week after week, the billboard ads plastering the streets of Paris consistently show the same visual codes, regardless of the brand or product that is being sold.

The first thing that you will notice while visiting the city is that the ads featuring women outnumber those featuring men at least 10:1 (by my VERY unscientific estimate).

How are those women portrayed?

They are always flawlessly-made up young women, under the age of 30, with lithe, delicate bodies in seductive poses. Thoroughly airbrushed, their bodies and faces possess the plastic-like quality of Barbie dolls. Their facial expression invariably reveal either extreme friendliness or a sensual ennui. Their stance is always inviting. Think: passive objects of lust. 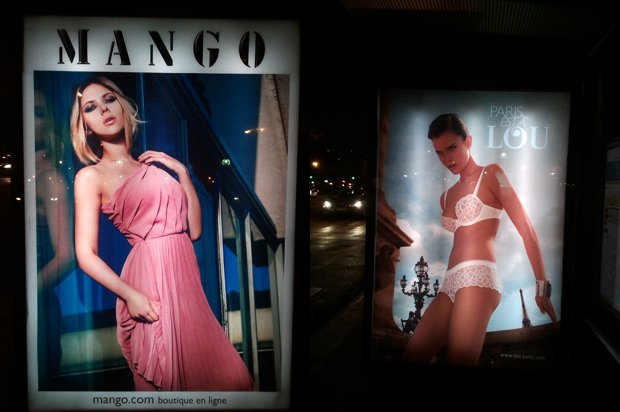 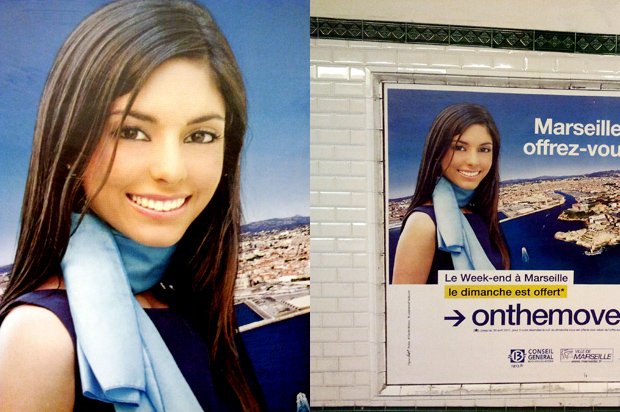 Advertisements featuring men are of a different kind altogether. The men tend to be average looking guys, ages 20 – 50, with visible wrinkles, stubble, and blemishes, constantly shown in active roles. Their bodies are never under examination. Indeed, those images exude strength, virility and a carefree attitude. 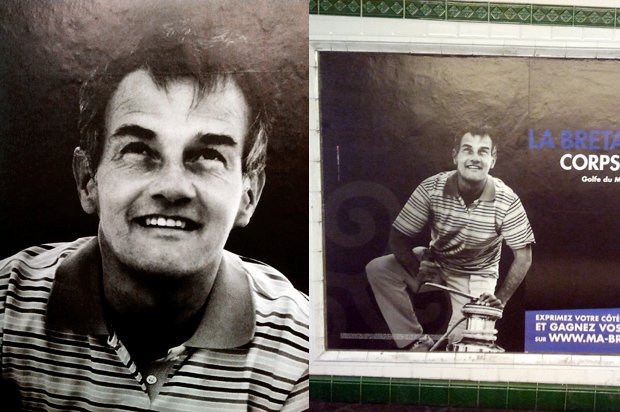 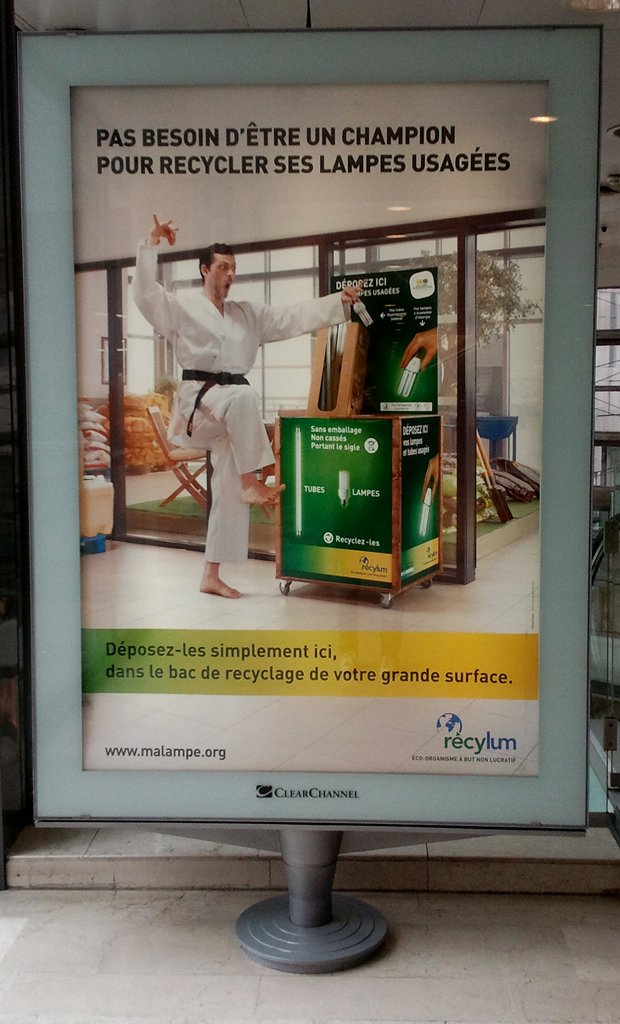 Since my move to Paris five years ago, the number of billboards around the city has mushroomed. Almost every month I find a new installation. JCDecaux, one of the world’s leading outdoor advertising companies, has struck a deal with the Paris major a few years ago: a quasi-free bike rental program called Velib’ in exchange for new advertising spaces around the city. And let me tell you, JCDecaux did take advantage of that, in a spectacular way. While walking around one of the most beautiful cities in the world, you are constantly bombarded with ads – which are now even illuminated at night – mostly showcasing the aforementioned young women as passive objects of lust.

I have lived in four different countries and traveled quite a bit, visiting north America, most countries in continental Europe, Israel, and Japan. Once again, by my very unscientific estimate, Paris wins hands down for the worst street harassment offenses. Just this past week, I’ve been repeatedly catcalled from passing cars while on the Velib’ bike – ah the irony! – including an instance of being photographed by a catcaller with a cellphone, while waiting for the traffic light to turn green. I have come across at least half a dozen men who would promptly make comments about my body and shout vulgar expletives when I didn’t react to them. I have been closely followed for two interminable minutes by a couple of inebriated homeless men who shouted to me: “Please mademoiselle, come see us for just a minute.” All this just in one week.

My point? Paris is a city saturated with images of women in ads who consistently come across as sexual objects. And men, in the street, treat real women as such, aggressively pursuing them and showing little respect.

This may seem like a simplistic correlation: in other cities I often visit, there is an equal number of objectified bodies in ads, but women in the street are treated with more respect. I am thinking of London, New York, and Milan – places I visit for extended stays every year. So, what makes Paris different? Many close female friends of mine would relate similar stories of harassment – verbal and physical.

Whenever I ponder over the issue of gender in France, I cannot help but think about an insightful article by Katrin Bennhold that appeared in the New York Times last November. In “Where Having It All Doesn’t Mean Having Equality,” Ms. Bennhold talks about the contradictions at the heart of French society when it comes to women’s roles. The phrase that remains etched in my mind:

The birthplace of Simone de Beauvoir and Brigitte Bardot may look Scandinavian in employment statistics, but it remains Latin in attitude. French women appear to worry about being feminine, not feminist, and French men often display a form of gallantry predating the 1789 revolution.

This really hits close to home. Because ever since moving here, I have noticed time and time again, a paucity of strong women in the limelight. The ideal French woman, in Gallic culture, is delicate, ultra-feminine, and soft-spoken. The reluctance of many French female acquaintances to discuss gender equality and feminism would often irk me. But in recent months, I have noticed a sea change in attitudes.

Adbusting and activism that targets street advertising are becoming more and more common. This week in my neighborhood, I spotted those two images: 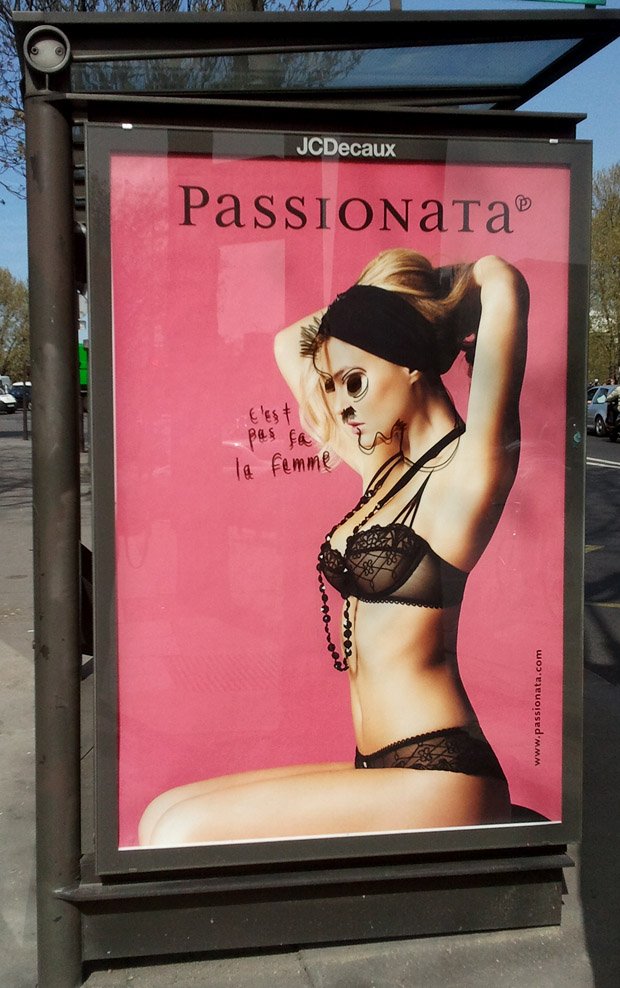 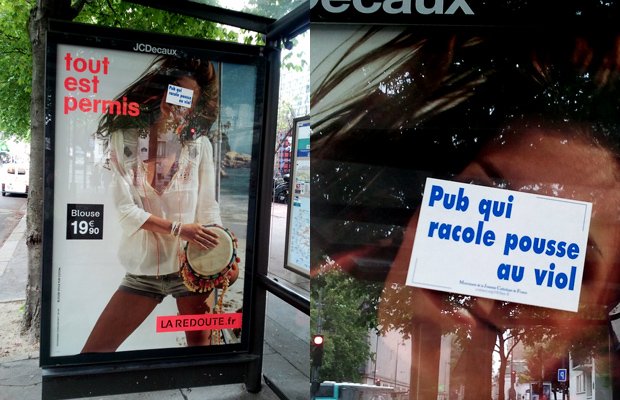 In the first instance, the scribbling on the ad reads: “This is not what a woman is like.” And the second – which I spotted just half an hour ago – is even more powerful. The copy of the ad – for a clothing company – reads: “Everything is allowed.” As you can see, the woman is wearing a rather revealing outfit, her legs are spread open and her blouse is undone. When I first saw the ad, in another location in Paris, I literally shivered. The juxtaposition of such a sexualized image with the text “Everything is allowed” had such nefarious undertones to make my stomach turn. Well, the sticker that was placed over the woman’s face on this billboard ad in my neighborhood reads, literally: “ad that solicits pushes rape.” The small copy at the bottom of the sticker credits the ad to the young catholic league.

Besides opposition to street advertising, the other thing that is giving me hope is the discovery of a young activist group called La Barbe (literally “The Beard” but in French ‘la barbe’ has the double meaning of ‘enough!’). Their goal is to raise awareness regarding the scarcity of women in positions of power in French society – in politics, in the arts, as well as in the corporate world. Their “actions” are totally irreverent: they show up at events/ceremonies wearing fake beards, crash the stage, and congratulate the event organizers – in a totally sarcastic way – for keeping women out of those events/ceremonies. And they do all this with such flair and eloquence. I have joined the group and I look forward to participating at future events. Here is their website, which includes videos of their actions: www.labarbelabarbe.org.

So, to sum things up, women’s role in France is a complex thing. Marketers and corporations consistently peddle a one-dimensional idea of womanhood, but the public is more and more aware of those tactics and is pushing back against this commercial, disempowering onslaught. I, for one, am feeling giddy at the idea of actively participating in this revolution.