Last week a series of ads by Unilever’s Lynx – a brand of deodorants for men – were banned by the UK’s Advertising Standard Authority over complaints that the ads were degrading to women and gratuitously objectified them.

According to this report by the Daily Mail,

[An ad] featured various close ups of [model Lucy Pinder’s] cleavage, while on-screen text invited viewers to ‘Play with Lucy’ and gave the Lynx website address. [Another ad] featured an image of the model in her underwear and bending over an oven door. The text stated ‘Can she make you lose control?’. A poster for the product, which featured another model taking a shower on a beach and wearing only bikini bottoms, drew more than 100 complaints with many upset that it was put up close to schools.

Following complaints by the public, the UK’s Advertising Standard Authority concluded that “the ads were likely to cause serious and widespread offence.” In particular, the ASA found that the language of the poster “clearly intended to imply that using the advertised product would lead to more uninhibited sexual behaviour.” They “therefore considered that the poster would be seen to make a link between purchasing the product and sex with women and in so doing would be seen to objectify women.” 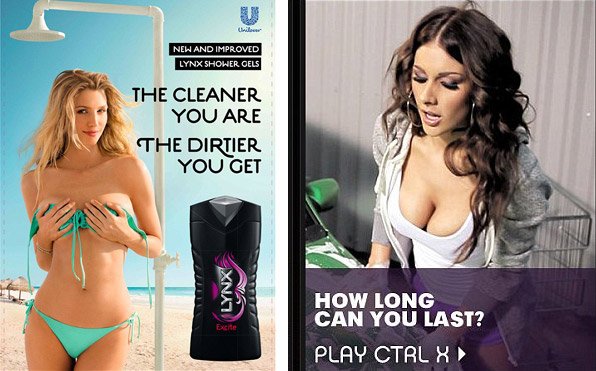 News about the ban reached the four corners of the globe. So Unilever decided to do some damage control: marketing and communications agency TMW (website here) created an “apology video” starring model Lucy Pinder. In the video Ms. Pinder, with a sour expression on her face, takes the props she used in the Lynx ads out of a box – and throws them across a table, getting rid of them. At the end of the video she looks down and says, “Sorry. Can I have the monkey back?”

My first reaction: this was at best an half-baked attempt at apologizing. The accusations – the objectification and sexualization of women – were not mentioned. The video made me think of the saying, “There is no such thing as bad publicity.” So I feel really ambivalent about writing this blog post – as it brings even more attention to the campaign.

Thing is, if anybody was to apologize, it would be the advertising executives and the creative people (director, copywriters) behind the ad. Model Lucy Pinder didn’t write the script of the original Lynx ads. Nor did she pick the costumes for them. She didn’t come up with the advertising slogan “Play with Lucy” or “Can She Make You Lose Control?” She was simply the “talent” in the video. I doubt the real people in charge are truly apologetic.

I bet the next ad by Lynx will be just as offensive. After all, their entire brand identity is focused on the objectification of women. See these ads and judge for yourself:

What do you think? Sincere apology or marketing gimmick?

The Democratization of Beauty – And Its Consequences

The Democratization of Beauty – And Its Consequences