I have been closely following the activities of the group “La Barbe” for over a year now – and yesterday I had the pleasure of celebrating International Women’s Day with them, filming their latest demonstration.

La Barbe is an activist group (“barbe” means “beard” in French and “la barbe” is also an idiom for “enough!”) founded in 2008, whose aim is to shed light on male domination in the economic, political, cultural and social spheres. Members of La Barbe regularly crash male-dominated events wearing beards and standing stoically behind event organizers, while a spokesperson from the group sarcastically congratulates the event’s host and praises him for keeping women out. The usual reaction – from event organizers/panelists and attendees – is smiles and chuckles because of the clever use of irony by the group.

Yesterday’s event was of a different nature altogether. For International Women’ Day, organizers from La Barbe sent out an invitation to all their members, asking them to gather at place de la Nation and help them put beards on the statues in the middle of the square.

In case you don’t speak French – here is a translation of what Corentine says in my video:

Today [France’s] political parties, especially the big ones, prefer to pay fines rather than adhere to gender equality laws and allow women to cover political posts within their parties. At today’s demonstration, we are going to distribute pamphlets asking people to adopt a new fictitious currency – which we have called the “erectile” – and to make donations in “erectile.” We’re asking people to help political parties big and small to make their candidates more virile. We’re very impressed to see how strongly powerful white men continue to resist and don’t want to give away any space to women, leaving them out of political roles. We invite you to help and encourage them by making donations in “erectile” on the special website we created for the occasion.

If you want to see the video in full HD, click here.

As Corentine mentioned, France has various gender equality laws in place but there are loopholes. Political parties prefer to pay heavy fines or lose subsidies rather than achieve the minimum number of female representatives within their ranks. For instance, Sarkozy’s political party UMP has to pay 4 million Euros in fines this year since only 28% of their candidates are women.

In the latest Global Gender Gap Report – released by the World Economic Forum – France occupies the 48th spot out of 135 nations. It’s well behind countries like Latvia (19th), Guyana (38th) and Kyrgyzstan (44th).

The French still have a long way to go, but a rise in activism and public consciousness could trigger a sea change. 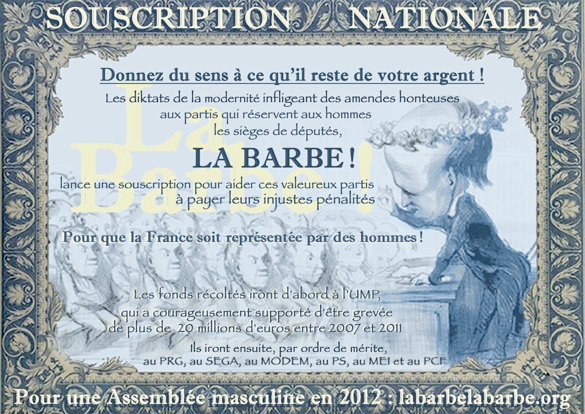