Perfect recipe for a media revolution:

2) Have them join forces in an ambitious campaign, set to broadcast empowering messages to girls in the world’s most famous square

3) Repeat step two in other cities across the world

The Brave Girls Alliance is a think tank of girl empowerment experts created by my dear friends and allies Ines Almeida (Toward the Stars) and Melissa Atkins Wardy (Pigtail Pals). I am proud to say that The Illusionists is a partner in this: I’m truly honored to be in such esteemed company, along with body image and girl empowerment activists that I’ve admired for years. 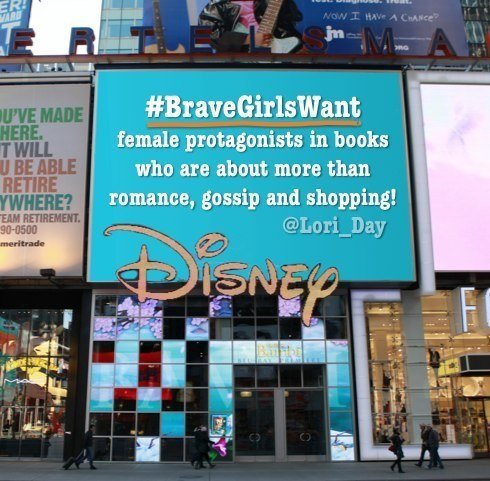 Over the course of 7 days, curated tweets and messages from our communities will be displayed on a billboard on Times Square. We will take up 4 minutes per hour from 6 am to 2 am. This will enable us to display 40 messages/tweets per hour. Just imagine… constructive, proactive and very inspiring messages being displayed in one of the centers of the world to millions and millions of people. Messages with suggestions for media and toys creators, retailers and big corporations.

The campaign is currently raising funds on the crowdfunding website Indiegogo. Amongst the campaign’s supporters, there is one of my all time heroes: Brenda Chapman, creator and co-director of Brave… who has recently written a glowing blog post about the Brave Girls Alliance.

What I LOVE about this initiative is that donors effectively become agents of change themselves: for $25 you could have your own message displayed on a billboard in Times Square! But you’d better hurry: there are less than 70 hours left till the end of the campaign.

Another fantastic way to support this initiative would be to spread the word on Facebook. Posting a message like:

My friends at the Brave Girls Alliance have 2 days to raise $1K for their #BraveGirlsWant billboard campaign in Times Square. Help this amazing team close the gap today: http://www.indiegogo.com/projects/brave-girls-invade-times-square No donation is too small!

I simply cannot wait for this initiative to come to fruition. Not just in New York, but also hopefully spreading to other cities around the world. I’m currently working on the ending of my documentary The Illusionists, where I’m highlighting successful examples of online activism. Needless to say, this billboard campaign makes me so happy and hopeful for the future… Let’s take back media!

The Problem with Dove

The Problem with Dove