I have been researching the topic of women’s portrayal in advertising, mass media, and popular culture for over two and a half years now. I have read reports about eyelid surgery on South Korean children. I have seen before-and-after pictures of patients going in for extreme Post-Bariatric Body Lift procedures (hint: if you are impressionable, don’t go there). I have read countless reports and dozens of books about the commercialization of children and the sexualization of young girls in mass media and advertising. I have signed up for Miss Bimbo, a game site for girls that encourages dieting and plastic surgery. So, after two and a half years of research, I thought that very little could faze me. I was wrong. My jaw literally dropped this week when, at my Parisian supermarket, I found a pyramid of Perrier water bottles that carried this label:

(you can click on the images to enlarge them) 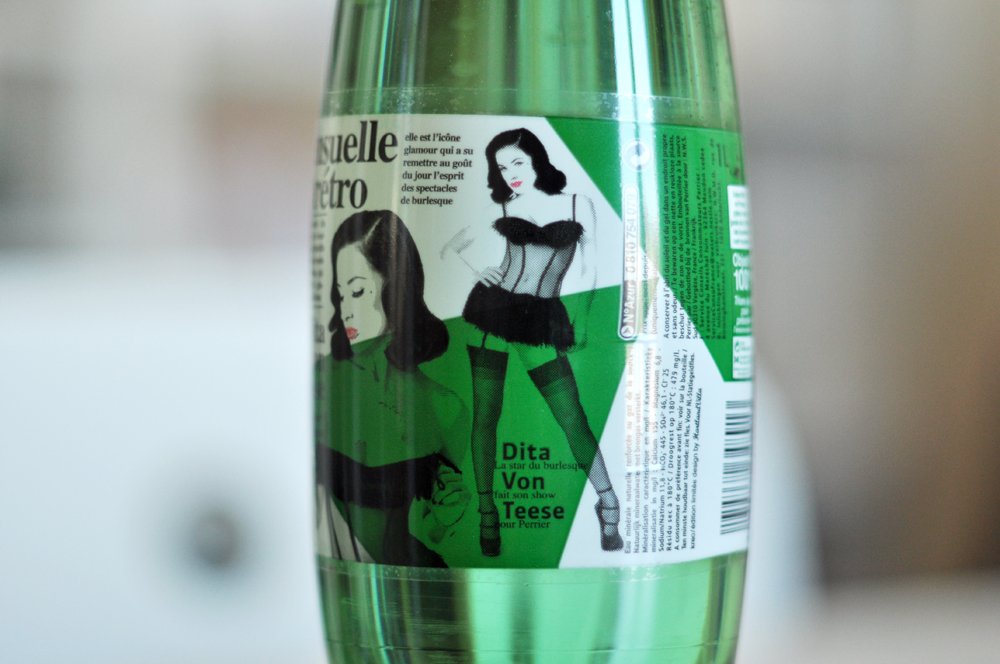 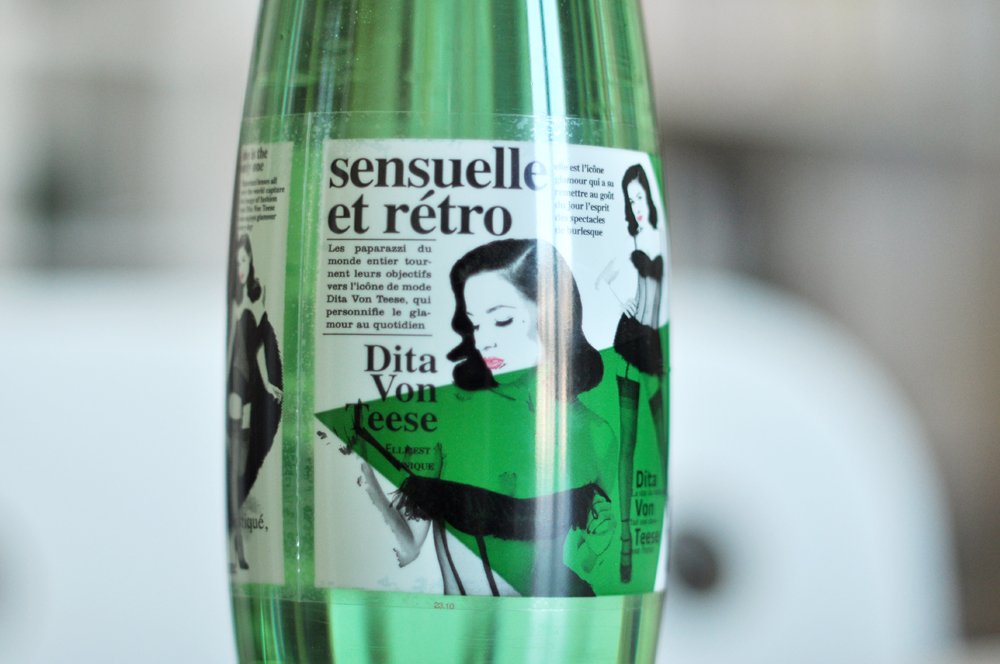 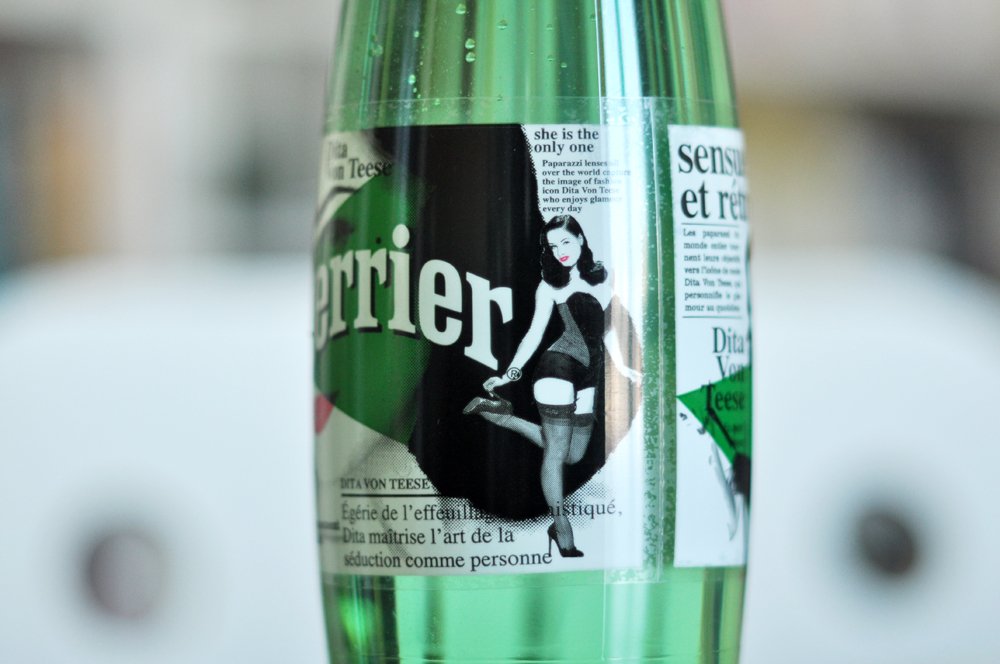 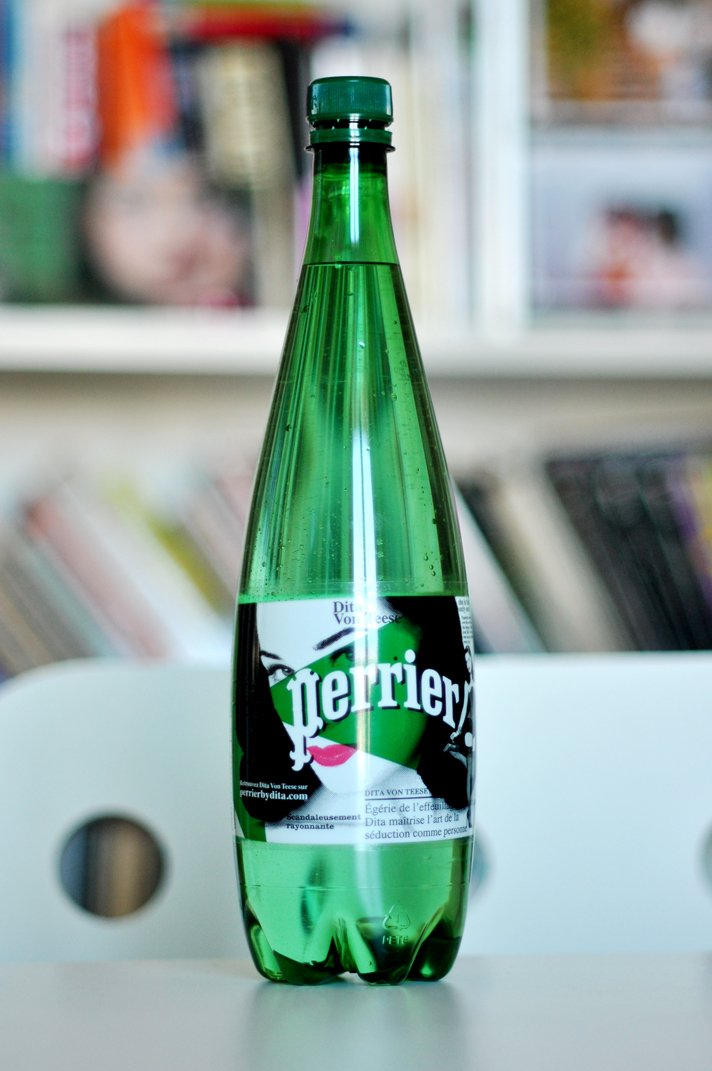 The copy on the label is also particularly troubling. It says:

In big type: “Sensual and Retro”

All around the world, the paparazzi turn their cameras’ lenses towards fashion icon Dita Von Teese, who personifies everyday glamour.

Even as I avoid mass media, eschewing television and magazines, I’m still exposed on a daily basis to hundreds of images that reduce women to sexual objects: magazine covers at newsstands, large billboards around the city, advertisements at bus stops and in subway stations. One place where I didn’t expect I would find Yet Another Gross Example of Objectification was the water aisle of my supermarket. My heart sank a little right then and there. Because I think of children and adolescents, exposed to that very same image of a stripper (you can call burlesque artists all you want, but at the end of the day Dita Von Teese is and remains a high class stripper) on water bottles. And that makes it normal, as in, “it’s now OK to put a picture of a half naked woman, in the process of removing her bra on just about anything.” But it is not. As a woman, I take offense in this. I am – we are – more than our bodies. We deserve dignity and respect. We deserve to be seen as a full human beings, and not be reduced to sex objects. Yet, this is what happens every day. Every. Single. Day. Time and time again.

This is precisely the reason why I started my multimedia project No Country for Young Women. To offer positive role models for girls and women of all ages. To give a voice and a platform to real, professional women, in a cultural climate saturated with images of young singers, actresses, and “reality TV stars” with no apparent talent. Enough of this. Growing up in the 1980s and early 1990s, I remember a different cultural climate. Why have things gone so terribly wrong in the past twenty years? How is it OK in 2010 to put the picture of a stripper on a water bottle?

I truly wish I could do more, in my own small way, against all this.