This week I am in London for the international summit “Endangered Species: Preserving the Female Body.” Eminent experts, activists, and politicians will hold presentations and workshops under a common goal: to “challenge the toxic culture that teaches women and girls to hate their bodies.” 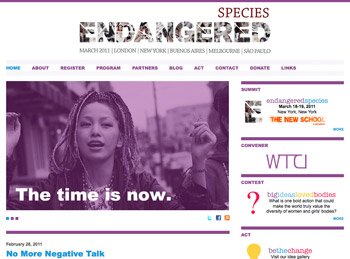 I will be there in a semi-official capacity, filming key speeches that I will use in my documentary “The Illusionists.” While I’m in London, I will also film around the city, focusing on billboard ads and storefronts (of the objectifying variety) in iconic London locations. (If you have suggestions of good locations, please leave them in the comments).

So, after a year of research, a year of writing, and a year of (unsuccessfully) shopping the project around to French TV network executives, the filming of The Illusionists officially begins this week. Guerrilla filmmaking style. I can’t even begin to express how excited I am.

For amusement purposes: here is the very first blog post I wrote, during the first week of research on “The Illusionists” – almost three years ago to this date: March 5th 2008 (link).