Earlier this evening I took a stroll through my neighborhood, scouting around for new ad campaigns to use in my Kickstarter video. I wasn’t let down: H&M blanketed the area with swimsuit ads. I also revisited the location of the hyper-sexualized deer in the Orangina ad (still there, outside a junior high school), and after about an hour of walking around, I stopped by a café to take notes.

On the big menu posted on the wall I noticed that the bar served Orangina. So in the interest of research I ordered it, even though I never drink soda (and thus, I deservedly got a stomachache. Current score: 1 – 1 in my match with Orangina).

When the small Orangina bottle landed on my table I immediately smiled. It was exactly what I was expecting. Or maybe better. Because the bottle carried on the brand’s hypersexualized-wild animals theme. Here it is in all its glory: 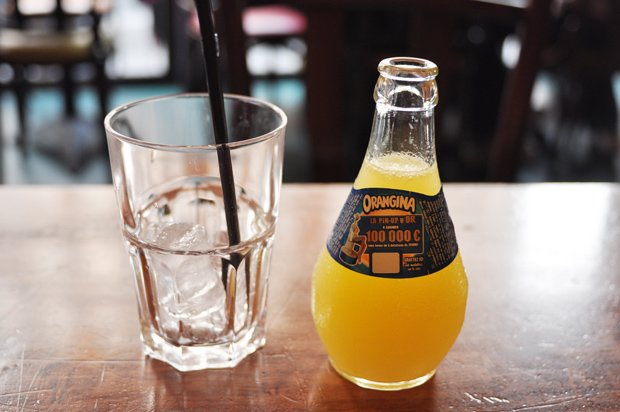 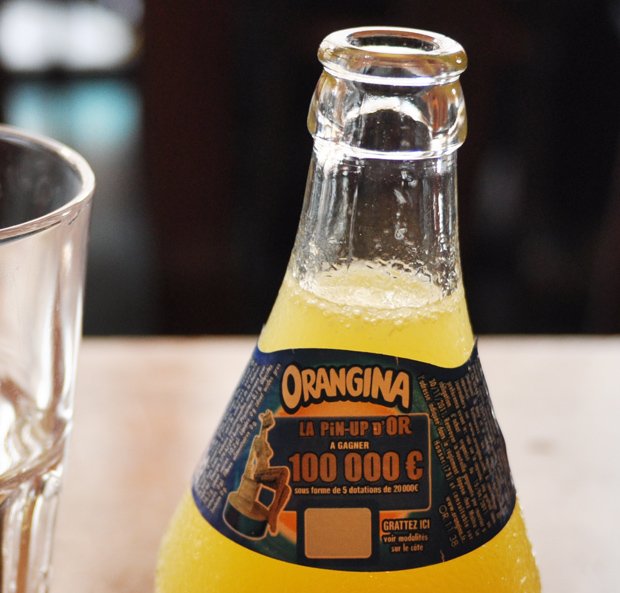 The copy reads: “Golden Pin Up – you can win 100,000 Euros.” The image used is that of the ubiquitous hyper-sexualized female deer that is currently plastered on billboard ads all over Paris.

A little parenthesis. As I said before, I would love to meet the marketing genius who came up with these ads. He (because I have a big hunch a man is behind this) has spearheaded a groundbreaking campaign that has changed our collective consciousness. Up until last year, when somebody mentioned a deer, my first thought-association would have been a cute fuzzy animal… the Disney cartoon Bambi… innocence… grace… sweetness. Now somebody says “deer” and I think: hyper-sexualized half-human half-animal creature with big breasts and red stiletto shoes drinking Orangina. Dear Marketing Genius Who Came Up With This Campaign, are you suffering from zoophiliac tendencies? Did you try to spin such impulses in a positive light, to become more acceptable in the eyes of your peers? Because dude, this is messed up.

And on a serious note, I find it really disturbing that the photo of an hyper-sexualized woman-deer that Orangina defines “a pin up” is plastered on the label of soft drinks that are extremely popular with children and teenagers. Orangina is normalizing the sexualization and objectification of females (however half-animal/half-human or simply human), making it “fun” and cartoonish. And in my book, there’s nothing fun about that. Au contraire.