“We deal in illusions, man. None of it is true!”

The other day, while flipping through TV channels, I stumbled upon one of my favorite films: Sidney Lumet’s “Network” (1976), a satirical, pitch-black behind the scenes look at the world of television.

So, you listen to me! Listen to me! Television is not the truth. Television is a god-damned amusement park. Television is a circus, a carnival, a traveling troupe of acrobats, story tellers, dancers, singers, jugglers, sideshow freaks, lion tamers and football players. We’re in the boredom-killing business. So if you want the truth, go to your God, go to your gurus, go to yourselves because that’s the only place you’re ever gonna find any real truth. But man, you’re never gonna get any truth from us. We’ll tell you anything you want to hear. We lie like hell! We’ll tell you that Kojak always gets the killer, and nobody ever gets cancer in Archie Bunker’s house. And no matter how much trouble the hero is in, don’t worry. Just look at your watch – at the end of the hour, he’s gonna win. We’ll tell you any s–t you want to hear.

And my favorite part from the speech:

If I had a million dollars’ worth of funding for The Illusionists, first thing I’d do, I’d buy the rights to use this scene!

You can watch it here (embedding is disabled for the video – if you click on the screenshot, it will lead you to YouTube): 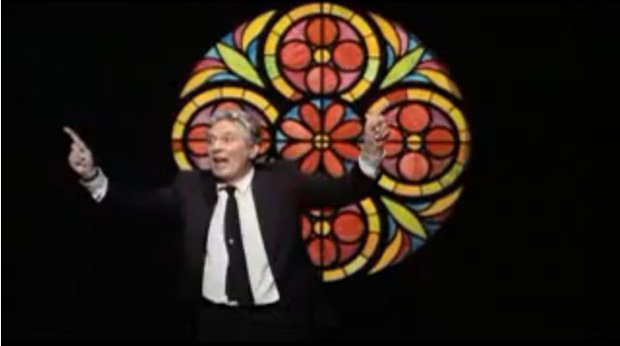