Rosalind Elsie Franklin, Lise Meitner, and Grace Murray Hopper. Do you think those great women scientists spent time playing with vintage style dressing rooms when they were girls? Do you think they decided to sit and look at a girl brushing her hair? No. They would be walking in museums, reading, conducting experiments, researching, and doing creative thinking. Legos are a great way to do the latter and I congratulate you on that. Legos are amazing and a great idea. They’re fun, brain building and easy to use. But when you turn them into a stereotypical toy, that’s just destroying the individuality so many people have been working for. Martin Luther King Jr. fought for blacks and whites to be equal. Today people are fighting for the equality of gay people. Susan B. Anthony and Gloria Steinem were fighting for women’s equality. And when I walk into a toy store and an attendant leads me to an aisle plastered with putrid pink I think you just swept all those people fighting for equality out of the way and ignored what they said.

There are plenty of smart and creative girls out there eager to play with Legos. Do you want that to be ruined, by giving them only a beauty salon to create? Please don’t. But I’m not proclaiming you should stop making those products, because they make generalizations about girls. But why just give us one option? There are plenty of girls ready to play with your ‘girl’s’ Legos. Plenty eager to pretend to comb hair and such. But then the girls who want superhero toys or adventure toys or dinosaurs or space toys or Harry Potter toys or Egyptian toys are forced to go to the boy’s aisle. They shouldn’t have to do that. Are you saying toys they want are for boys only? It’s not right to make a girl feel like she’s not acting like a girl should or is different. Are boys the only people who can do constructive things? No! But forcing a girl to go to the boy’s aisle, making her feel like she shouldn’t use Legos that aren’t pink and girly is just plain stupid. Why don’t you even have a boy’s category on your website? Are you saying boys can play with everything they want, unlike girls who have pink beauty salons? You have a girl science lab Lego set, yet it’s still pink and calls the things included “accessories”. The other themes, such as Ninjago call them staffs, or weapons. So even girl science lab appliances are called the same girly thing as jewelry. Why do that? To make money? That really makes me feel so much better about the world I live in.

And there’s another thing that makes me more secure about today’s lifestyle. If the girl does go to the boy’s aisle what meets her eyes is the sight of war. Legos you can use that create a war scene, or spies shooting at each other or a spaceship with guns to shoot aliens. Does this seem right? Do we need more war in our bloodstained world? It gives kids the idea that war is funny or nothing to be worried about. Movies surround us with people fighting each other with powers and guns. Little boys like my cousin see people getting blown up, but then just singed or bouncing. Getting hit with lasers and just looking wounded but then reviving quickly or pretending to be dead than sneaking up on the bad guy because they missed. This isn’t real life. Many people have died in war, families torn apart, torturings of innocent people and betrayal driven by fear. This is war. Children need to understand that.

You say, ‘I’m just making a living. The kids like it, it’s not your fault the world isn’t perfect and they don’t understand it. Or that some girls feel like they’re weird or that they should be making beauty salons instead of whatever they feel like.’ But it is in a way. You’re just a piece of the fault. You are a part of that thought growing in a kid’s mind about how they should be and what to think. Make it be the right idea. Please. Make a kid’s world a little less narrow-minded and stereotypical. Make some of it right. 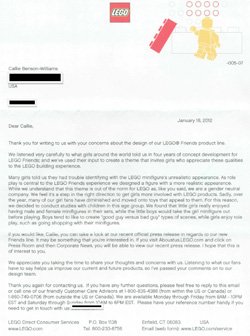 Thank you for writing to us with your concerns about the design of our LEGO (R) Friends product line.

We listened very carefully to what girls around the world told us in four years of concept development for LEGO Friends: and we’ve used their input to create a theme that invites girl who appreciate these qualities to the LEGO building experience.

Many girls told us they had trouble identifying with the LEGO minifigure’s unrealistic appearance. As role play is central to the LEGO Friends experience we designed a figure with a more realistic appearance. While we understand that this theme is out of the norm for LEGO as, like you said, we are a gender neutral company. We feel it’s a step in the right direction to get girls more involved with LEGO products. Sadly, over the year, many of our girl fans have diminished and moved onto toys that appeal to them. For this reason, we decided to conduct studies with children in this age group. We found that little girls really enjoyed having male and female minifigures in their sets, while the little boys would take the girl minifigure out before playing. Boys tend to like to create “good guy versus bay guy” types of scenes, while girls enjoy role play, such as going shopping with their minifigures.

If you would like, Callie, you can take a look at our recent official press release in regards to our new Friends line. It may be something that you’re interested in. If you visit Aboutus.LEGO.com and click on Press Room and then Corporate News, you will be able to view our recent press release. I hope that this is of interest to you.

We appreciate you taking the time to share you thoughts and concerns with us. Listening to what our fans have to say helps us improve our current and future products, so I’ve passed your comments on to our design team.

Thank you again for contacting us………

Lego – Girls left your company because you stopped making gender neutral toys, and focused on boys and movies licenses. You pushed girls out. Girls didn’t lost an interest in building, they lost in interest in a boy-centric company. You gendered your toy, not little girls.

Lego – Little girls don’t go shopping with their friends. They are little girls with wild imaginations and a sense of adventure. You gave them beauty shops and cupcake bakeries. Science laboratories do not come with accessories, they come with science equipment and tools.

This blog post originally appeared on Pigtail Pals: Redefine Girly! with the title: “10 Year Old Girl tells Lego they are a piece of the fault. Lego says it’s her.” Article cross-posted with permission.