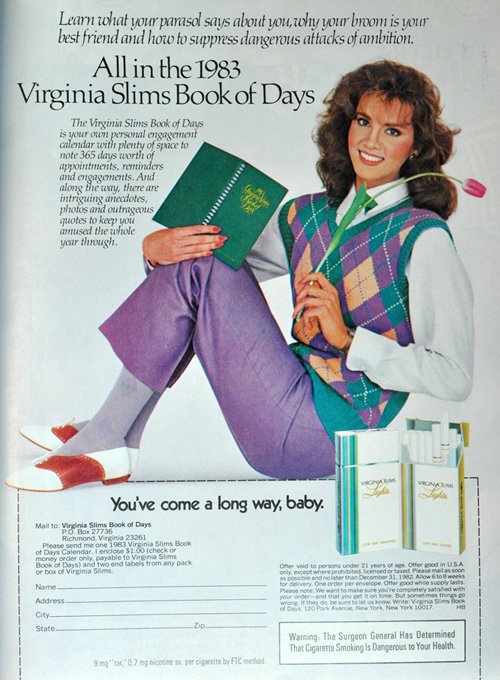 For the past two weeks I’ve been busy editing the very beginning of “The Illusionists” – a 10 minute sequence that introduces all the main theses of the documentary. I want to include brief glimpses at advertisements and magazine articles from the 1930s to our days, so yesterday afternoon I was at the library, going through dozens of old issues of Vogue, Cosmopolitan, Ebony, Harper’s Bazaar and People magazine.

In the December 1982 issue of Harper’s Bazaar, I found an ad by cigarette brand Virginia Slims, which I found disturbing on many levels.

But first, some background information about the company. In her excellent book “Can’t Buy My Love,” activist, filmmaker and author Jean Kilbourne (whom I had the honor of interviewing in The Illusionists) writes,

In 1968 Virginia Slims was introduced by Philip Morris. In the following six years, the number of girls ages twelve to eighteen who smoked more than doubled. There followed a proliferation of cigarettes designed exclusively for women, such as More, Now (which exploitively had the same name as the acronym for the National Organization for Women), Max, Eve, Satin and Misty. By 1979, magazine tobacco advertisements targeting women equaled those targeted to men. These advertisements offered and continue to offer smoking to young women as a way to rebel and be cool, of course, but also as a way to control both their emotions and their weight. And, of course, advertisements offer cigarettes to everyone as a powerful symbol of sexuality.”

The ad from Harper’s Bazaar offered a diary for 1983 – The “Virginia Slims Book of Days.” It could be obtained by mailing a 1 dollar check to Virginia Slims and enclosing two labels from any packs of Virginia Slim cigarettes.

I quickly glanced at the headline and I had to read it over at least three times – I simply could not believe it. My first reaction was: this must certainly be meant in irony. I did some research online when I returned home and I’m afraid to say they meant every single word, when they proclaimed:

Learn what your parasol says about you, why your broom is your best friend and how to suppress dangerous attacks of ambition. All in the 1983 Virginia Slims Book of Days 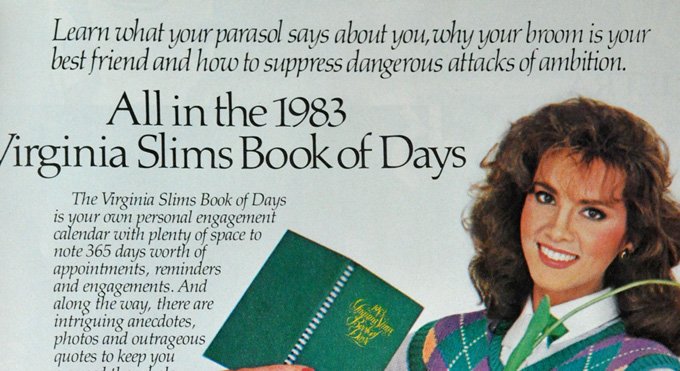 And underneath the headline:

“The Virginia Slims Book of Days is your own personal engagement calendar with plenty of space to note 365 days worth of appointments, reminders and engagements. And along the way, there are intriguing anecdotes, photos and outrageous quotes to keep you amused the whole year through.”

Underneath the picture of the model is the big bold slogan:

(Which sort of contradicts the bit about the broom and the dangers of ambitions, but who are we to judge?)

If you come across any examples of badvertisements, please send them to illusionists.film [at] gmail [dot ] com

The Economics of Beauty: For The Price Of…

The Economics of Beauty: For The Price Of…