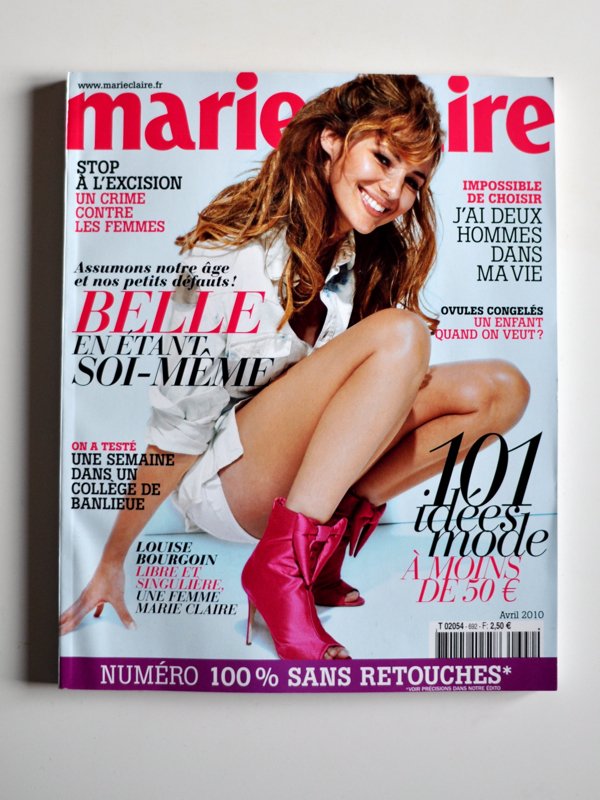 Over the course of the last year, the publishing industry has witnessed a backlash against idealized images of female beauty. Women’s magazines such as Elle, Glamour, Marie Claire, and Vogue have released special issues promoting diversity. Plus-size models. Black models. Photos of actresses and professional models without makeup or airbrushing. Is this a real push for change or a mere marketing gimmick?

The current issue of Marie Claire France boasts the following headline on its cover: “100% Without Airbrushing*” The asterisk points to small type just underneath the word “airbrushing” and to the following message: “read clarifications in our editorial.”

Louise Bourgoin – a rising TV and movie star in France – could not have been a better pick for this special issue. At 29, she possesses incredibly good looks and porcelain skin. A casual observer could not really tell that this cover is any different from other magazine covers. Louise looks flawless. The giveaway sign – of the absence of photo retouching – is her hair: it doesn’t possess the plastic, uniform, glossy quality of airbrushed hair. The big headline on the left hand side says: “Let’s accept our age and our small flaws! Beautiful just as you are.” 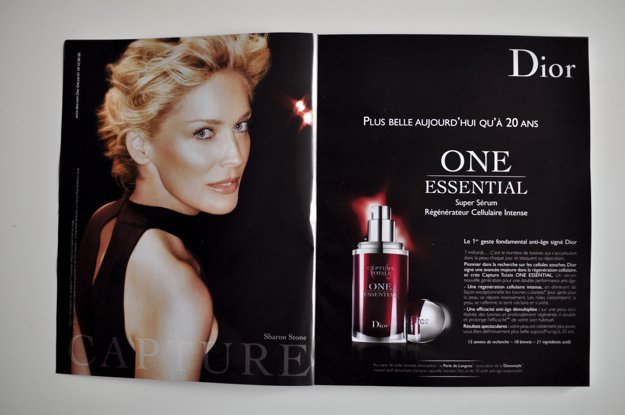 Indeed the entire April issue of Marie Claire features more ads for anti-wrinkle and concealer creams than any other product. Every major luxury and consumer brand is represented here, with photos of 40 and 50 year old celebrities that are heavily airbrushed. They have neither wrinkles nor skin pores.

After 29 pages of ads we arrive at the editorial: 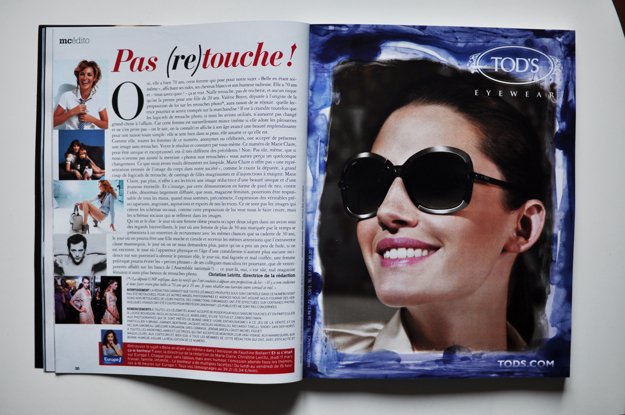 Christine Leiritz, editor in chief of Marie Claire, starts off by lauding the presence of an older woman in the magazine: she’s 70 years old, but oh so radiant! “She wasn’t retouched, so there are no chances that we’ll mistake her for a 20 year old.” No kidding. Then, Leiritz mentions the work of UMP representative Valérie Boyer, a politician that is lobbying for the introduction of labels next to retouched photos. For Leiritz, Marie Claire has never engaged in the misrepresentation of women in the magazine; like other women’s magazines, “it is not responsible for all the evils of society, for the anxieties, aspirations and hopes of its readers.” Leiritz continues:

Images do not create social norms, as the law proposal [of Ms. Boyer] wants us to believe; it is rather the opposite: the images [in women’s magazines] are a reflection of our society’s norms.

And then Leiritz rambles on saying that women’s magazines won’t need airbrushing anymore the day that an obese woman will occupy two seats on a plane without reproaches from fellow passengers; the day that a woman over 50 with a face “marked by her years” will have the same chances as a 30 year old at a job interview, the day that a young woman – shy and unattractive – will receive the same attentions as the extroverted beauty in her class… and on and on and on… Mon Dieu!

At the bottom of the page, in small text, the editorial team of Marie Claire explains that the claim “100% without airbrushing” refers to the original photo shoots done for the magazine. Ads and candid, party photos do not apply. 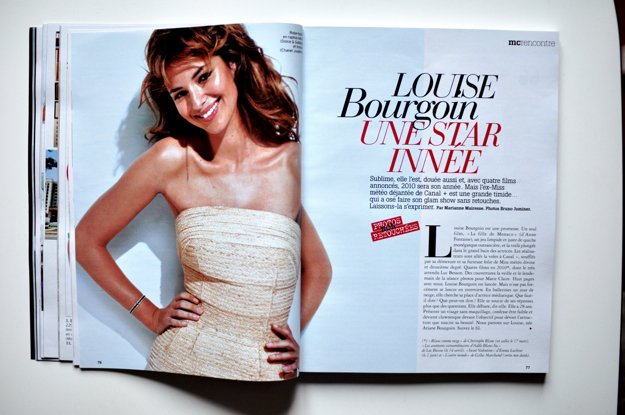 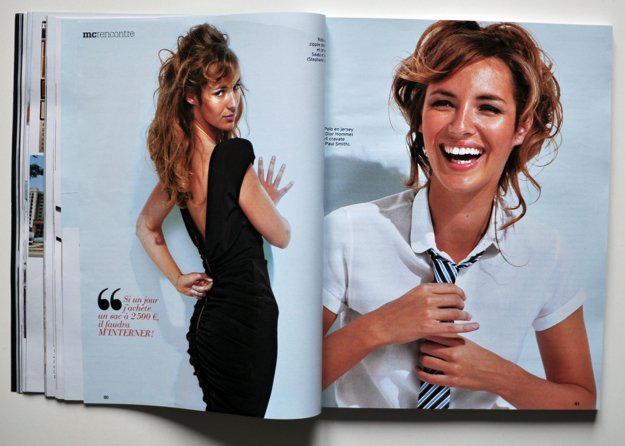 It is quite nice to see for once natural lines and blemishes… And yet, Louise is so flawlessly beautiful that she would not have needed that much airbrushing anyways. More anti-wrinkle ads are peppered here and there in the magazine. 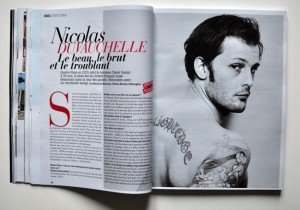 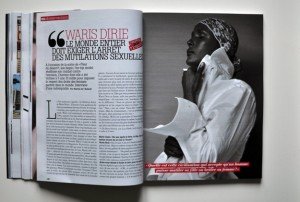 The label “No Airbrushing” actually means very little. Any budding photographer knows that wrinkles and blemishes can be minimized through makeup (for the face AND body) and the strategic use of light.

Using black and white can do magic in the absence of airbrushing and can give photographers more leeway when it comes to light tricks. Black & white also gives photos a sense of timelessness and makes portraits look more glamorous.

In the case of the feature on Nicolas Duvauchelle (see left), there is so much light projected on his face that the entire photo looks overexposed. Oldest trick in the book to minimize fine lines.

As for the former model Waris Dirie (see the second photo on the left) no strong spotlight is used on her. And the background in the photo is darker. Odd choice. Is this to take some of the attention away from her face? You can barely see anything!

Finally, we arrive at the feature on regular women of various ages. The framing of each photo speaks volumes. A 22 year old woman is shown in a close-up; a 38 year old is shown in a medium shot – it is thus harder to see her natural skin and the lines on her face. 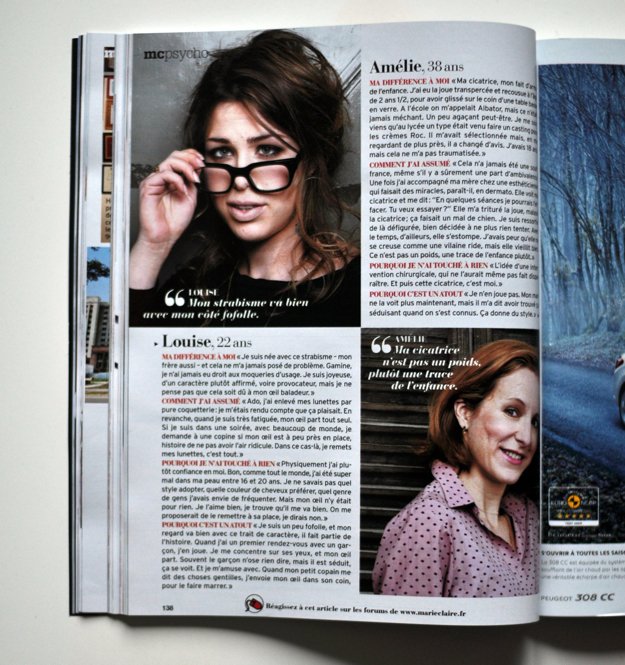 And then, we arrive at the well publicized photo of a 71 year old. It is a disappointment to see that it is a large shot – she’s so far away from the camera, with her head turned side-ways, that it is really hard to see her face. 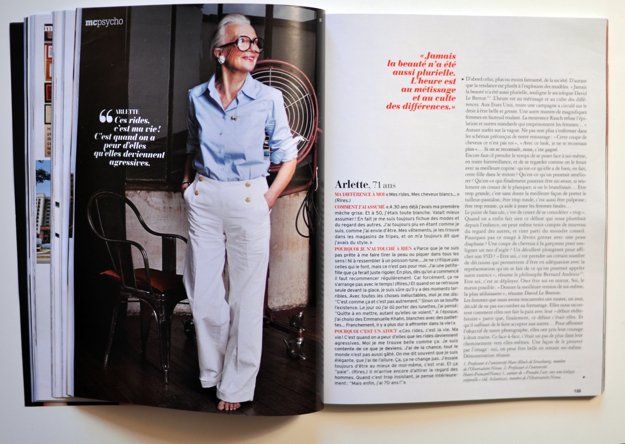 It is not surprising to see why advertisers have embraced this issue of Marie Claire: there is hardly anything revolutionary about it.

While the original photos produced for this issue may be without airbrushing, they overwhelmingly portray 20- and 30- year olds who already have minuscule lines on their faces. The lighting is so strong that it makes their skin look great. And so, I assume, new anxieties will assail female readers: if their skin looks so good even in an issue without airbrushing, what am I doing wrong?

The answer is at hand. The magazine is chock full of ads for anti-wrinkle and concealer creams. Marie Claire is implicitly pushing women in opposite directions: accept your “small flaws” BUT remember to buy lots of products to minimize them.

This magazine ultimately feels like the Big Bad Wolf disguised in the clothes of Little Red Riding Hood’s grandmother.

It will not boost your self-esteem. It will leave a bitter taste in your mouth. You are better off buying Ms. Magazine or staying entirely away from the newsstand.

I’ll leave you with a quote by the amazing Naomi Wolf. In the Beauty Myth she wrote:

Magazines, consciously or half-consciously, must project the attitude that looking one’s age is bad because $650 million of their ad revenue comes from people who would go out of business if visible age looked good. […] The advertisers who make women’s mass culture possible depend on making women feel bad enough about their faces and bodies to spend more money on worthless or pain-inducing products than they would if they felt innately beautiful.

Annals of Badvertising: Does Your Husband Look Younger than You Do?

Annals of Badvertising: Does Your Husband Look Younger than You Do?