The Quiet Revolution: Will Wrinkles Disappear from TV & Films?

Two years ago a headline on NPR.org caught my attention: “Hollywood Makeovers, Frame by Frame.” It was a Morning Edition report by Susan Stamberg (which you can listen here) about the digital revolution sweeping over Hollywood: the ability to control and manipulate every tiny inch of a film’s frame with the click of a mouse. For years, photographers had been able to do just that with the aid of Photoshop; filmmakers, thanks to post-production companies like Company 3,  could now expect the same results:

Sonnenfeld touched up Cruise’s close-ups [in Mission Impossible III]. He also did a little smoothing on Johnny Depp’s face in Sweeney Todd. In fact, some stars now have digital coloring written into their contracts.

The piece ran on March 18, 2008. Since then, I have noticed with increased frequency the name “Company 3” during the end credits of many, many films. The digital revolution is here.

This morning I noticed a headline on Jezebel.com: “Glee Retouchers Forgot To Take Wrinkles Out Of Jane Lynch’s Reflection In ‘Vogue’ Video.” I couldn’t see the video embedded on Jezebel, since Hulu is not available in France, so I went to the Fox.com website, found the video, and took screenshots. I was simply astounded by it. See for yourselves: 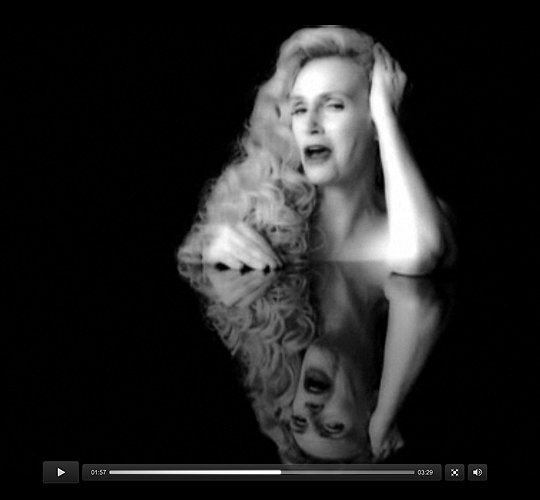 For full effect, I flipped the image upsidedown: 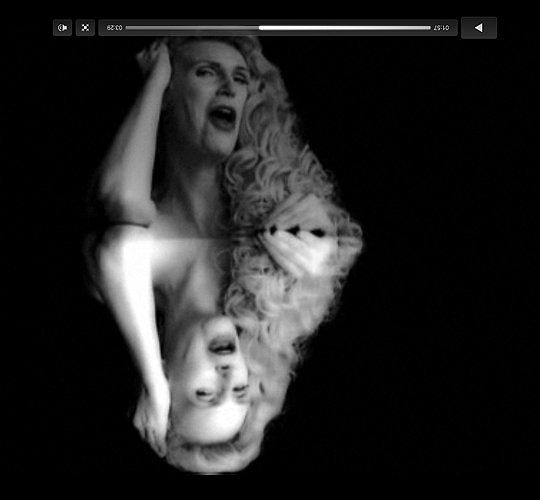 The real face of Jane Lynch, reflected in the mirror, is so strikingly different from the retouched image on top. I am fairly certain that all of Ms. Lynch’s close-ups in the rest of the video were also retouched. How sad. Not for the Vogue video in question, or for the TV show Glee, but rather as a foreshadowing of things to come: as digital technologies become more and more advanced, will we ever see naturally lined faces in the future, or will they completely disappear from TV and films?

I am afraid that the moving image will one day share the same fate as the still images that we see in magazines from Los Angeles to Shanghai – where it is actually impossible to find a woman over the age of 40 with a naturally lined face, all thanks to the “magic” of Photoshop. According to recent studies, our media consumption is increasingly exponentially: we are spending most of our waking lives looking at screens. Think: TV screens, computers, smartphones, iPads and other digital tablets, cinema screens… What will happen to our self-esteem and body image, if in the future all these screens will show people with impeccable complexions, free of lines and blemishes? Technology is certainly pointing in that direction.