“Sex Sells” They Tell Us. But What Are We Really Buying?

The old adage “sex sells” is starting to exasperate me. I have my reasons.

First of all, I find it to be a simplistic, shallow expression. A conversation stopper, the tip of the iceberg of a bigger problem: the systematic objectification and sexualization of women’s bodies in order to draw attention to one’s product (or service). A worldwide phenomenon that has intensified in the last two decades and that is sparing no one. Not even children (more on this later).

“Sex sells” could be used to justify the abhorrent latest video by Kanye West, appropriately titled “Monster.” It portrays an array of scantly dressed dead models. But what is it selling exactly, if not the view that it is acceptable to glamorize female corpses? What is so hot about that? Publicity maybe? As in, Kanye West probably knows that by pushing boundaries and taboos (hello necrophilia!) he could draw attention to this music video and thus be talked about… That’s my theory at least. In the meantime, thousands of teenage girls and boys will be exposed to this revolting video clip and may start to see it as “no big deal.”

“Sex sells.” This is the justification that a popular, revered Italian journalist invokes to explain the recurrence of salacious photos and stories on the front page of corriere.it – the website of Italy’s oldest, most reputable newspaper. He’s not alone. Whenever I bring up the subject with my father, we end up in heated arguments about journalistic ethics and seriousness vs. the need to sell newspapers. And so, I have stopped reading Corriere della Sera online. Enough with photos of naked celebrities or stories about how a German pornstar went into a coma after a breast augmentation procedure (main page, January 14 2011). I believe that the process of selecting these trivial bits of information and giving them a platform on the main page of a serious news site, day after day, will push readers to believe those are important, newsworthy articles. Thus relegating serious stories to oblivion. Yes, the repercussions of the earthquake in Haiti and mass rapes in the Congo are depressing topics, but aren’t they more newsworthy than Maria Sharapova’s diamond ring? (Corriere della Sera front page, January 14th). 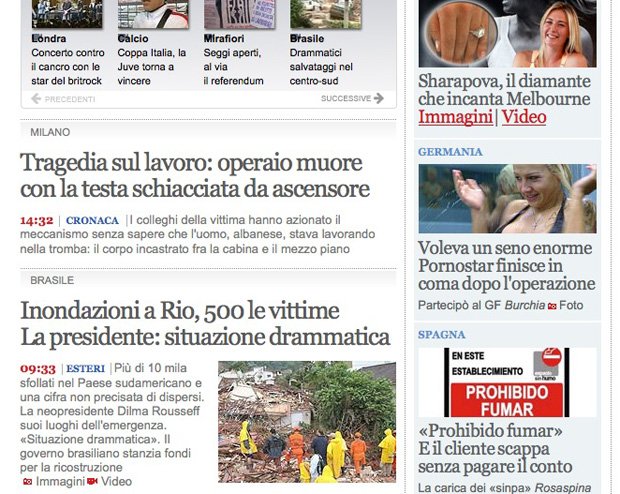 I could go on and on with dozens of other examples.

“Sex sells” we are told, but what exactly are we buying? Sex is so prevalent in our visual culture, but one thing we are certainly not buying is the idea of sexual pleasure itself. To quote Ariel Levy, author of Male Chauvinist Pigs:

There is a disconnect between sexiness or hotness and sex itself. […] Passion isn’t the point. The glossy, overheated thumping of sexuality in our culture is less about connection than consumption.

By saturating mass media (TV, movies, the internet, newspapers and magazines) with photos of “beautiful” bodies – most of the time just One Official Body type, from L.A. to Tokyo – businesses are pushing people to buy an endless array of products and treatments with the hope of emulating those images. There is endless consumerism built around that. Women are told that a beautiful body consists of:

– perky, C-cup breasts that stay in place even while lying down on one’s back (breast surgery – which by the way is the most popular cosmetic procedure for women in the 19-34 age bracket)

– hairless body, starting from below the eyebrows down to one’s toes – intimate parts included (beauty salon)

– perfectly groomed hands and feet (manicure and pedicure at a nail salon);

And the list could go on and on with the inclusion of cosmetic products (lipstick, mascara, eyeshadow…)

Most of the practices listed above have become de rigueur in the 20th century. A Brazilian wax was unheard of in the Western world as recently as in the early 1990s. When I think of all this, Jean Kilbourne’s words come to mind. In her film Killing Us Softly she speaks about the effects of advertising on our thoughts and behaviors. She is indeed answering the question: sex sells, but what are we really buying?

The primary purpose of the mass media is to sell products. Advertising does sell products of course, but it also sells a great deal more than products. It sells values, it sells images, it sells concepts of love and sexuality, of romance, of success, and perhaps most important, of normalcy. To a great extent, advertising tells us who we are and who we should be.

What deeply worries me is the relentless marketing of the beauty myth to kids – especially over the last 15 years. In Cinderella Ate My Daughter, writer Peggy Orenstein debunks many myths related to play and gender – explaining how the color pink, princess gowns and dolls for girls have been trends manufactured by the toy industry. 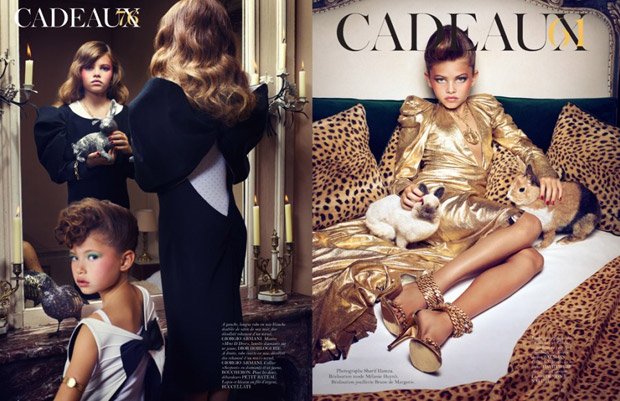 Above: an image from the December 2010 issue of French Vogue.

What we are ultimately buying – as women, girls, daughters, mothers – is a heavy bag of insecurities that we carry with us wherever we go. Because women who are thoroughly happy about the way that they (naturally) look ultimately make… bad consumers.

I look forward to attending the Endangered Species conference in London this coming March, connecting with fellow body image activists, rallying around a common theme: “Take back your body.”

An Important Appeal: Stop this “Monster”

An Important Appeal: Stop this “Monster”